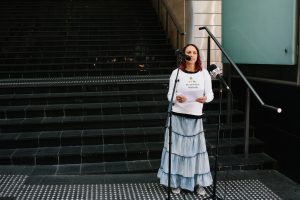 Virginia speaking at the #MothersforMidwives event in Sydney. Photo by Jersuha Sutton Photography

Hi, I’m Virginia Maddock, a homebirth mum of 2 and a doula. I am going to fill you in on the herstory of what I have seen happen to homebirth in Australia since I became interested in and then participated in homebirth…

In 2006 I trained to be a doula and became enamoured by the philosophy of homebirth when I attended the Homebirth Access Sydney midwife and consumer meetings in Bondi Junction, 3 years before I became a mother myself.

In 2009 it was my turn to be more than an outside bystander, and I had my first baby at home with a privately practicing midwife who I had met at those meetings. In those days, privately practicing midwives were regulated by the Australian Nurses and Midwifery Council, just like hospital midwives were, and professional indemnity insurance was not available for private midwives, nor legally necessary. There was also no requirement to have anyone other than my single midwife at my birth and I felt completely safe under her care. She was directly employed by me, she provided woman-centred, evidence based, gold standard of care while being answerable to internationally accepted midwifery standards and the Australian law.

Soon after having my first son, I became a volunteer for Homebirth Access Sydney and it was later that same year that the Australian Health Practitioner Regulation Agency (or AHPRA) was formed in order to have one National registration body to regulate all health care professions including midwifery, and the Nursing and Midwifery Board of Australia (NMBA) became the new board, to ‘protect the public’ from “dangerous” midwives. Professional indemnity insurance became a requirement for all registered health practitioners from July 1st 2010, however with no insurance product available for midwives to cover them for birth, it was looking like the death of homebirth midwifery and safer, midwife-assisted homebirth for women.

So in September of 2009 – less than 10 months before women birthing at home would have no midwife legally able to attend them, the Mother of All Rallies happened, with 3000 of us women, men and children gathering outside Parliament House in Canberra in the pouring rain, demanding that homebirth be saved from the death of over regulation. It was apparently the biggest feminist protest in Australia in decades. And the submissions received to the Inquiry by the Committee on Community Affairs to protest the Health Legislation Amendment and the Midwives Professional Indemnity Bills were reported to be the largest number in Australian history. Fortunately the strong advocacy and fire in our bellies that Australian homebirth stake holders possessed in 2009, saved us from the outright outlawing of homebirth midwifery, but only put us into a short-lived reprieve. The government came up with a temporary measure and allowed private midwives to be exempt from insurance for the birth portion of their care, but only until July 2013 which fortunately covered my midwife for my next homebirth in 2011.

Meanwhile, some consumer and midwifery groups had the idealistic yet perhaps misguided idea of appealing to the government to provide Medicare rebates for privately practicing midwives so that homebirth could become more affordable for consumers, and so midwives could continue to support women autonomously in the case of hospital transfer. So in November of 2010, the Federal Government and all the State and Territory Health Ministers implemented the National Maternity Services Plan which promised women better access to homebirth and included Medicare rebates for eligible midwives.

Unfortunately with Medicare and more government involvement came more regulations and what we have seen since then has been the increasing meddling of government into homebirth midwifery practice. Since 2010, as part of Medicare eligibility, homebirth midwives have had to obtain a signed collaborative agreement with a Doctor, Obstetrician, or Obstetrician led hospital board – a requirement that to this day has many women unable to hire a midwife due to being unable to find a GP or Ob willing to write a referral. This is leading to women free birthing when they would much prefer having a midwife in attendance.

The insurance issue has not gone away as the exemption for the requirement for midwives to hold professional indemnity insurance for birth at home was never open ended. What started as an initial exemption deadline for the government to find a solution by December 2013 has been extended another 3 times. The first extension was to July 2015, followed by December 2016 and again to December 2019. Each time it has approached the time when babies were to be conceived before the exemption was to end, there has been a great deal of panic from homebirth midwives and consumers, as pregnant women needed to know if they were able to hire a midwife during their pregnancy for their birth at home, and midwives needed to know if they could legally attend births at home.

And then we come to the most recent change to midwifery practice which was the introduction of what we all know as the “2 midwife rule”, which came into effect on January 1st 2017. Since this legal requirement, we have seen the number of midwives in private practice further drop dramatically due to many being unable to find another suitably trained health practitioner to partner with at births, particularly in rural and regional areas.

Due to midwives having to purchase insurance to cover them for prenatal and postnatal visits, and them having to pay for the second midwife to attend their client’s birth, their prices have risen anyway, which has absorbed any savings that women were hoping to get from obtaining Medicare rebates.

And that is why Homebirth Consortium Australia was born. The song that I woke up with in my head this morning was “From little things, big things grow” because what started out as an idea, has grown into the movement you see today, which I hope will continue to gain momentum. HCA are a committed bunch of consumers and midwives from around Australia, working together to demand reforms to improve freedom for midwives, and therefore freedom for birthing women.

So we are calling on the government to make the following changes:

Thank you to everyone from HCA who has worked so hard to get this little idea of mine off the ground, to every one of you who have given up your Saturdays to support our midwives, a massive thank you to my parter in crime Aimee Sing, who has done all the hard yards and gone above and beyond to get this rally going by coordinating this and almost every rally across Australia that is happening right now in all capital cities – without you this would not be going ahead or be the big success that it is. But especially a thank you, to my midwives, and to all the midwives across Australia, who give us their heart and hands, and risk their careers every time they support a birth. Happy Midwives Day!

Let’s hope that the government listens to our concerns and gives our midwives the freedom to practice in their best capacity, so that us mothers and our sisters, daughters and beyond can continue to birth at home in safety. We are stronger together!