View cart “Birthings Issue 136 – Healing Homebirth 1” has been added to your cart. 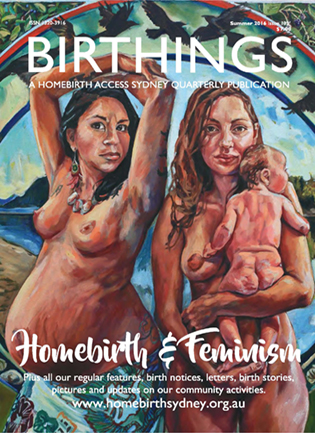 “Welcome to our Summer issue of Birthings 2016, ‘Homebirth and Feminism”. This is a really interesting theme, isn’t it? Homebirth has always been part of us. On the other hand, organised feminism is relatively new in history, which only really started in the mid1800s and is still going today. So how do we connect the two dots?

I think the key is women. Women have been giving birth since the beginning of humanity. Pregnancy and birth is the most natural, powerful and significant event in her life as well as for the whole community. In the history of birth, women were the centre of attention for many centuries. She was the superstar and everyone supported her for the magic to happen. Then the Feminism Movement began which made a huge impact in the society we live now. Our ancestors fought to gain their voices, their rights and their power to make this world a fairer place for modern women to live. But the fight of gender equality is still persistent today, even when it comes to the most feminine of subjects such as Birth.” – BITNA CASTILLO – Birthings Editor

Why Birth is a Feminist Issue – GAYE DEMANUELE

Birthing Brief and the Calm in the Storm – HOLLY HIGH

There are no reviews yet.