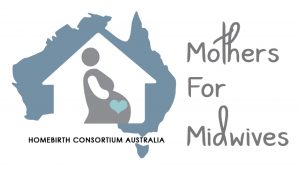 On May 5th, International Midwives Day, over 500 women and their families gathered outside Australian Health Practitioner Regulation Agency (AHPRA) offices Australia-wide to protest the over-regulation of Privately Practising Midwives (PPMs) and the consequent restriction of birth choices for Australian women. Almost 1800 people signed the associated petition, over 330 people used the Homebirth Consortium Australia (HCA) profile picture frame and approximately 30 additional people participated in a ‘virtual’ rally on Facebook. In addition to this, the event reached the media 7 times on the day, including Sky News, CityNews.com, interviews on radio stations 4EB and HuonFM, news grabs on 2GB both before and after the event, a podcast release with The Circle of Birth, further news grabs on Melbourne radio stations and a newspaper article with a local Brisbane-based newspaper.

There are over 32,000 registered midwives, with around 28,000 midwives employed by public and private hospitals in Australia. However, there is also a seriously shrinking population of PPMs who assist women to birth at home. Statistics from the Australian Institute of Health and Welfare show that in 2014 there were 287 midwives attending homebirths as a primary carer – this included PPMs and also midwives attending publicly funded homebirths through the 14 hospital-led homebirth programs. In 2015 that number fell to 241, and that number has certainly shrunk dramatically since then as regulations have stifled the health professionals who work in private practice, and who home birthing women rely on to maintain safety.

Amantha McGuinness from Homebirth Australia says, “Ever increasing regulation and the relentless vexatious reporting of PPMs has led to a decline in the number of midwives supporting homebirths, with those remaining in practice often feeling marginalised, unsupported and unable to practice in a way that aligns with the midwifery philosophy of being ‘with woman’. Many women, particularly those in regional and rural areas, are unable to access homebirth at all. Despite the extra regulation, women are still birthing and midwives are still working without intrapartum insurance for a homebirth with no valid solution in sight. The new requirement for two midwives at homebirth is also impacting on women and their birth options. Women in many areas of Australia who want a homebirth with a midwife are now faced with the choice to travel great distances to access midwives, or birth at home without a midwife at all. This begs the question: are all the regulations actually making birth safer, or are they just reducing and restricting the options of birthing women?”

With a decreasing chance of “normal birth” and an increasing caesarean rate in Australian hospitals, the choice to homebirth is not one that is going away. But with less and less homebirth midwives to assist women during the prenatal, birth and postnatal period, there is a danger that these women, many of whom are casualties of an underfunded, understaffed, fragmented and broken hospital system, will choose to birth at home anyway, but without the safety of a midwife in attendance. Indeed freebirth is said to be on the increase.

Professor of Midwifery Hannah Dahlen says “We have undertaken several studies into the issue of freebirth and it appears to be increasing in Australia. Women tell us the main reasons they freebirth is they are unable to find a midwife in their area or can’t afford to pay for them. More and more women are fleeing mainstream maternity care after previous traumatic birth experiences. We will continue to see adverse outcomes unless we fix the system and respect women’s right to choose their place of birth and care provider.”

Jo Hunter, a privately practising midwife from the Blue Mountains, says she had 14 enquiries for April and had to turn away 10 women as she could only support 4 of them for the month.

Homebirth Consortium Australia [HCA] is a newly formed working group made up of midwife, consumer and organisation representatives from around Australia. The HCA was formed to show support for homebirth and for Privately Practising Midwives (PPMs) and fight for changes to government policies so that midwives can return to working more autonomously and within their full scope of practice to support home birthing families. They are calling on the government, AHPRA, Nursing and Midwifery Board of Australia (NMBA) and the National Health and Medical Research Council (NHMRC) to make the following changes:

The women of Australia are demanding change, because government regulation of midwives directly affects women’s choices in how and where women birth. For more information, please see the Homebirth Consortium Australia [HCA] facebook page and associated Facebook event or contact Aimee Sing or Virginia Maddock.